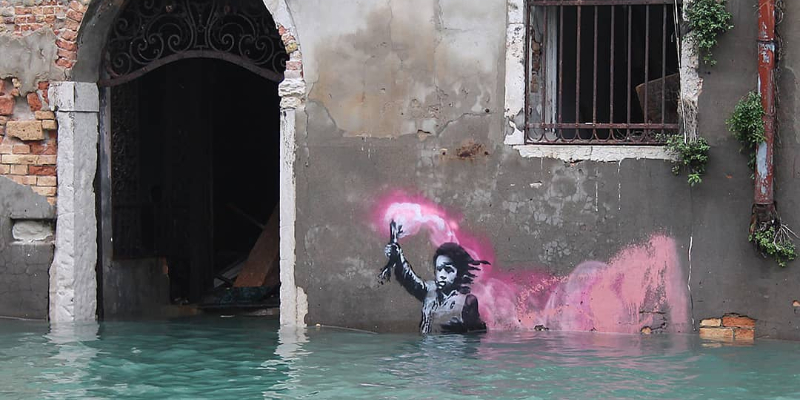 Calling on the art enthusiasts…

Banksy’s identity maybe a mystery, but that doesn’t stop him from being one of the world’s most famous contemporary artists. The British street artist’s murals and art pieces are displayed all over the world, and is now making its way to Saudi Arabia.

The artist was named as one of the 100 most influential people in the world by Time magazine in 2010, and ever since his star seems to have shined brighter. With his pieces displayed in the most prestigious museums and events, such as Miami’s Art Basel, and auctioned off for millions of dirhams, you don’t need to be an art buff to know his name to be familiar with at least one of his pieces.

The street artists work made it into the region earlier this month, when some of his work was displayed at the Show & Tell: On View exhibition in DIFC Dubai. Now, Banksy is going to Saudi, as the “The Art of Banksy ‘Without Limits’”, exhibition is set to make a stop in Riyadh on February 21.

The traveling Banksy exhibition has already made stops in several European capitals including Amsterdam, Berlin, and Paris. Art enthusiasts in the Kingdom will be able to taken in some of the artists best work, as the exhibition showcases 70 creations from various private collections.

Seeing as how Banksy has made a name for himself with his social and political pieces, fans can expect to explore themes that tackle several issues like the refugee crisis or the Palestinian conflict. Not only that, but a documentary about the British artist’s life will also be shown at the exhibition in celebration of his artwork and messages.

So, if you are a fan of art, make sure you do not miss the “The Art of Banksy ‘Without Limits’” exhibition which will run at the King Abdullah Financial Centre in Riyadh from February 21 until April 20.

Why this Lebanese jewellery designer is grabbing our attention

Coronavirus Pandemic - The cast of the movie Contagion: Control the Contagion - Spreading Facts, Not Fear