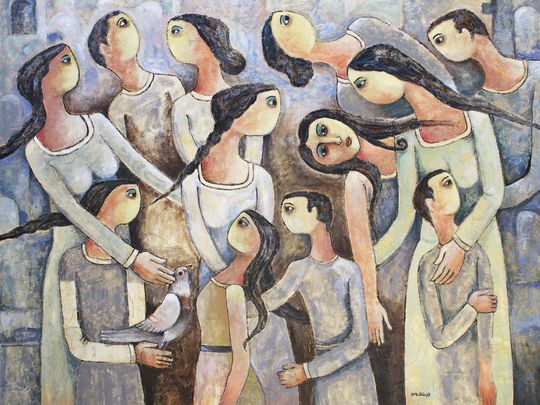 At a time when protests against racial discrimination are raging across the world, the show draws attention to the protests and struggles of Palestinians living under occupation.

Through emotionally charged artworks it recalls the tragic history of Palestinian suffering, but also conveys a message of resilience in the face of adversity and hope for a better future.

Anani is a pioneer of contemporary Palestinian art and played a key role in the establishment of the first International Academy of Fine Art in Palestine. The show features paintings from his well-known series, ‘Demonstration’, depicting Palestinians participating in demonstrations against Israeli occupation.

The postures of the men and women, some holding children or hugging each other and the presence of domestic animals such as a dog, a dove or a goat hidden among the human figures highlights how protests have become a central part of daily life in Palestine.

Mansour, who is known as the artist of the intifada for his portrayal of the Palestinian struggle is best known for his painting, ‘Camel of Hardship’, depicting an old porter carrying Jerusalem on his back that has become an enduring symbol of the suffering of Palestinians.

His work in this show, ‘Revolution was the Beginning’, tells the story of Palestine since the Nakba or Catastrophe of 1948 when Palestinians were forced to flee from their homeland. The long painting begins with a scene of a refugee camp with endless rows of tents under a dark, stormy sky and ends with a young man and woman marching with the Palestinian flag.

The Dome of the Rock and olive groves are a central feature of the composition which is filled with motifs such as keys, doves, hawks, olive branches, guns, walls, traditional embroidery patterns, burning tyres, and mothers weeping over dying children that symbolise the right of return, imprisonment, the Apartheid Wall, martyrdom, and the evolution of the Palestinian struggle through history.

Barakat usually works with monochromes, using dark colours to reflect the hardships of life. His abstract black and white paintings in the show, titled Light in the Dark feature several windows signifying the feeling of confinement and yearning for freedom.

Each window tells a different story about events and emotions such as the Nakba, dispossession, the Intifada, Israeli invasions of Palestinian towns, the Apartheid Wall, Jerusalem, and life under occupation. The stories appear to have been drawn out from the deep, dark well of lost memory in a determined attempt to document and preserve them for future generations of Palestinians.

In contrast Khaled Hourani’s paintings in the show are about the future, and the spirit of resilience that will help the next generation to overcome every challenge. Each painting depicts a child leaping over the Israeli Apartheid Wall as if it is of no significance. The series celebrates a generation that bravely faces armed soldiers in protests today and will challenge the occupation tomorrow.

Wafa Hourani’s installation, ‘Mirror Party’, is a layered work reflecting the realities of living under occupation. It presents a segment of the concrete Apartheid Wall with a mirror placed on one face imagining the emergence of a Palestinian political party that will place a large mirror along the Wall making it disappear. While highlighting the significance of the Wall, the work criticises the internal politics in Palestine questioning the focus on the Wall rather than on confronting political realities.

During the first Intifida (1987-1993) Anani, Mansour, Barakat and other artists who were part of the New Vision Movement boycotted Israeli art materials and instead began using natural local materials such as mud, henna, wood, and leather. The show includes some recent works created with these materials by the artists.

Ziad Anani, director of Zawyeh Gallery, says: “Palestinian art expresses our yearning for freedom and conveys a strong message of creativity and resilience. The artworks in this show are connected in terms of the subject and the artists’ experimentation with different materials. We are excited to present some of the best Palestinian artists at a cultural hub like Alserkal Avenue in Dubai and we hope art lovers will visit the show to view the intricate details and experience the materiality of the works up close.”

The exhibition will run at Warehouse 44 in Alserkal Avenue until September 30.

Book this Dubai staycation and get a free beauty box

Oil prices slip on uncertainty over US recovery, stimulus

UAE weather: It is hazy and partly cloudy across the emirates