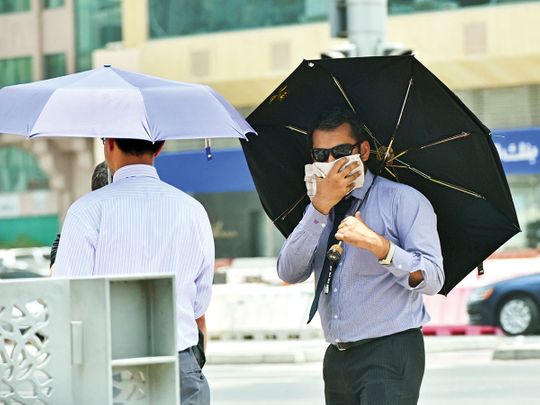 Dubai: Take necessary precautions as you head out today, particularly if you suffer from allergies, as it’s doing to be a dusty day in some parts of the UAE.

According to the National Center of Meteorology (NCM), today’s skies are looking partly cloudy especially over the north of the UAE, like in Sharjah, Fujairah and Ras Al Khaimah.

Winds are also expected to blow dust and sand into the air, especially in the eastern region, like in the emirate of Fujairah. The NCM has issued a yellow alert due to the conditions.

The winds are expected to blow dust and sand into the air. Drivers have been warned to be careful on the road as the dust might hinder visibility. Those who suffer from allergies should also take precautions when going outside.

The temperatures are expected to be in the mid to high 20s on average during the day.

Dubai is currently at 19 °C with sunny skies.

The relative humidity is currently at 81 per cent across the UAE.

Conditions at the Arabian Gulf are expected to be rough due to the winds, with wave height reaching up to 8 feet. The NCM has issued a yellow alert due to the rough conditions.

All permits for Ramadan tents and iftar gatherings cancelled in Ajman