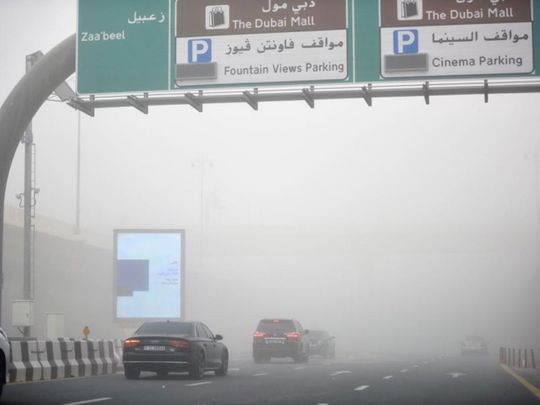 The first day of Eid saw heavy rain, lash parts of the country, including Abu Dhabi, Dubai and Sharjah. Many areas saw dust storms, thunderstorms and even hail.

An amber alert was issued by the UAE's weather bureau, for motorists and residents to exercise caution due to decreased visibility.

A National Center of Meteorology (NCM) official confirmed on Sunday, that cloud seeding flights were dispatched after convective clouds were monitored over the country, to maximise rainfall in the region.

Weather forecast during Eid Al-Fitr holidays, from Sunday, May 24, to Tuesday, May 26

The NCM has said that "the weather is expected to be hot in general, dusty, and partly cloudy over some areas during daytimes and rather hot to mild by night," over the next few days.

According to the forecast, there is "a chance of convective clouds, by afternoon, accompanied with some rainfall over some eastern and northern areas of the country extending over some internal and southern areas, especially on Sunday and Monday."

Windy conditions are also expected in the coming days: "Light to moderate Southeasterly to Northeasterly and northerly, becoming fresh to strong at times with convective clouds, causing blowing dust and sand."

The country's weather bureau has advised residents to exercise caution while driving due to poor horizontal visibility caused by rainfall and dust. Rain water can also cause wadis to flood, so it is best to avoid such areas.

The UAE saw temperatures reaching over 43°C this week. Today's rainfall is not expected to affect the temperature or cause any noticable dip.

Sea will be moderate to rough especially with clouds in the Arabian Gulf and in Oman Sea.

Coronavirus threat: How safe are public toilets in the UAE?

Bring it on: UFC is a start, Abu Dhabi is ready for more