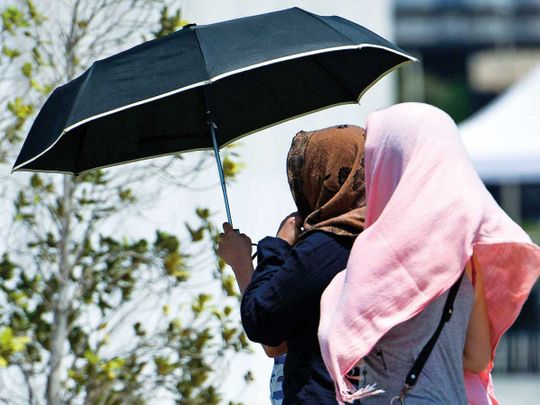 A hot summer week is in store for residents, so don't forget your umbrella or a hat when going outdoors.

The weather forecast for the day, according to the National Centre of Meteorology (NCM), predicts fair to partly cloudy skies with a chance of some convective clouds formation east and southwards by afternoon.

It will be humid on Monday night and Tuesday early morning - with a probability of fog or mist formation westward.

The maximum temperature in the country is expected to be between 44 and 48 °C. And, the lowest will be between 27 and 31 °C.

NCM predicts  light to moderate Southeasterly to Northeasterly winds, freshening at times causing blowing dust and sand, with a speed of 20 – 30 km per hour, reaching 40 km per hour at times.

Sea will be slight to moderate in the Arabian Gulf and in Oman Sea.

Forecast for the rest of the week is similar with highs of 44 to 47 degrees Celsius with relative humidity levels reaching as high as 90 per cent in mountainous regions of the country.

Justin Bieber 'asked to leave' exclusive gym, because Taylor Swift had 'booked it'

How I got my job as...Aesthetic dentist at Apa Aesthetic clinic in Dubai

Kim Kardashian is really serious about the lawyer thing