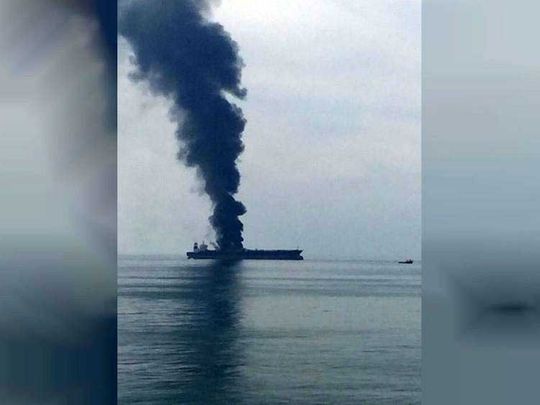 Dubai: The Indian Consulate in Dubai on Thursday repatriated the mortal remains of one of the two Indians who died in a fire onboard an oil tanker off the coast of Sharjah on January 29.

The mission announced on social media that the mortal remains of Shiva Naga Babu, one of the victims of fire accident on the vessel MT SAM, were sent to India on Thursday morning.

Mortal remains of the other identified Indian, Basudeb Haldar, will also be sent to India shortly, it added in the post.

They were the two Indian victims, whose bodies could be identified, and two other Indians had gone missing after the deadly fire on board the unloaded oil tanker 21 miles off the coast of Sharjah.

There were 12 crew members and 44 technicians on board when fire erupted. They included Indian, Bangladeshi, Pakistani, Ethiopian and other undisclosed nationalities.

All Indian crew members were safe and the victims were technicians hired by a Fujairah-based company to do maintenance work on the vessel bound for India where it was due to be scrapped.

The death toll rose to four after authorities announced retrieving two more bodies, which could not be identified, on February 2. It was also confirmed that there were actually four people who had gone missing.

Consul General of India in Dubai on February 2 told Gulf News that local authorities had decided to conduct DNA tests on the two unidentified bodies to establish the victims’ identities.

Speaking to Gulf News on Thursday, Vipul said the mission was awaiting DNA test reports from the local authorities to verify if the unidentified bodies belonged to the missing Indians--Kolangi Thankavel from Tamil Nadu and Mohammad Abbas Ansari from Bihar.

He said the mortal remains of Shiva Naga Babu were repatriated to his native place in Andhra Pradesh.

“We are expecting to repatriate the mortal remains of Basudeb Haldar to his hometown in West Bengal by tomorrow [Friday],” he added.

Watch: How a 3-year-old Indian boy trapped in a swimming pool in Dubai was rescued

IPL 2020 in UAE: Fans soak up the excitement as action goes live