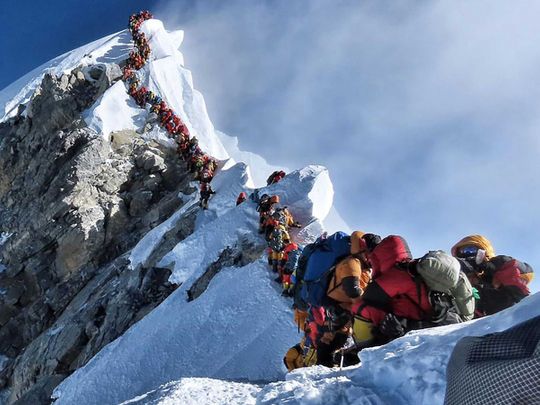 Dubai: Mount Everest is a honeypot that has lost its shine and the best mountaineers will now seek true adventure on lesser unclaimed peaks, according to legendary British climber, Sir Chris Bonington.

His comments come after a photo went viral last year of climbers queuing to get to the top of the world’s tallest mountain (8,848-metres) in their hundreds.

“It’s become kind of a giant honeypot in a way, and, yes, I think to a degree it has lost its shine,” said Bonington, 85, who was briefly the oldest man to summit Everest aged 50 in 1985 on his fourth attempt, after having also led the first successful ascent of the southwest face in 1975 without personally reaching the top.

“The year I did it was actually the last year that the Nepalese authorities only allowed one expedition on the mountain at a time, that meant we had Everest all to ourselves, which is far from how it is today,” he told Gulf News, ahead of his appearance at the Emirates Airline Festival of Literature at Dubai Festival City from February 4-9.

Each generation has a group of people who are true innovators who are pushing the limit of human achievement, so no, the human being will always find new challenges, it’s amazing what mankind can do.

“The fact you now have a thousand people at base camp and literally hundreds going to the summit on a line of fixed rope going all the way up is inevitable progression.

“In Europe people have been guided up Mount Blanc and the Matterhorn for many, many years, so the moment the Nepalese authorities allowed any number of people to go up Everest they did that so they could make more money out of Everest because let’s face it, Nepal is a very poor country.”

In light of 12 deaths last season, however, Bonington said, “I think changes definitely need to be made. Sherpas need to be much better trained and you need to find ways of regulating numbers, but it’s a complicated issue because if you reduce the numbers going there you affect the economy of the entire population.”

Many of these deaths occurred as a result of the ‘death zone’ queues with people running out of oxygen or succumbing to conditions.

Nepalese authorities have so far proposed new rules to obtain a permit to climb Everest, which include proving that you; have already climbed a 6,500-metre mountain in Nepal, have a clean bill of health and that your Sherpa has at least three years’ experience of organising high altitude climbs.

I would have thought that if a person desperately wants to get to the top it’s not going to affect them whether there’s lots of people doing it or not, there’s still a big success and failure rate.

“For each individual that manages to get up there it’s a hugely important experience for them but it’s different to what I would do,” added Bonington. “The brilliant climbers now aren’t going anywhere near Everest. They are pushing the limits of what can be climbed — and there are hundreds of unclimbed peaks in the Himalayas where you can find true adventure.”

Sir Ranulph Fiennes, 75 — another British explorer set to attend Lit Fest, and the first person to reach both poles and Everest — said, “When I got to the top there wasn’t anyone else there because it was the middle of the night. My Sherpa said to me I know people don’t like going by night but it’s much safer.”

“I would hate to have been in that photo,” he added of the picture of climbers queuing to reach the top. “I would have been very frightened.

“Humans are always going to want the furthest, highest or lowest, and you can’t stop human nature, but the authorities need to make it so you don’t get one place where you can’t overtake where people coming down can’t get past people going up, that’s very dangerous because of oxygen supplies dropping.

“If possible there should be two lines everywhere including on the narrows so at every point you can pass someone on a separate rope. But at the moment on certain narrows you can’t pass and people could panic.”

Unlike Bonington however Fiennes didn’t think overcrowding would turn people off Everest or force them to look for adventure elsewhere.

“I would have thought that if a person desperately wants to get to the top it’s not going to affect them whether there’s lots of people doing it or not, there’s still a big success and failure rate,” said Fiennes.

“It could be that the great climbers will just go up different more difficult routes up Everest, but they will carry on.”

Asked if Everest’s overcrowding was proof that mankind had little left to conquer, Fiennes replied, “There are so many fields of expeditions from mountain climbing unclaimed territories and north faces — hundreds are left and still haven’t done — to jungles in Brazil where if you have medical knowledge you could discover and pioneer new medicines out of plants.

“The oceans have not been explored beyond 30 per cent and space is huge. In terms of polar travel there are only two poles and only a certain way of reaching them but there’s only one expedition without gimmicks that hasn’t been done and that’s crossing Antarctica during the polar winter.”

Bonington agreed, “Each generation has a group of people who are true innovators who are pushing the limit of human achievement, so no, the human being will always find new challenges, it’s amazing what mankind can do.”

Both Sir Chris Bonington and Sir Ranulph Fiennes will be at the Emirates Airline Festival of Literature at Dubai Festival City from February 4-9. The pair will be in conversation together at a session from 6pm to 7pm on Friday February 7. Tickets cost Dh59.

UAE weather: It's fair and cloudy today across the emirates

Just walk through a tunnel for Dubai Airports passport control

Bhoot Part One review: Get on board the haunted ship with Vicky Kaushal