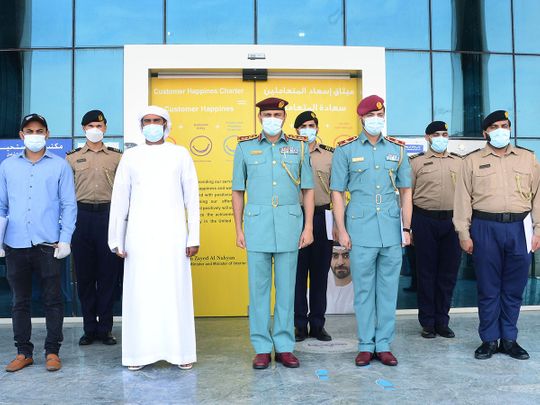 Sharjah: An Emirati man was honoured by Sharjah police for his act of bravery and helping the police arrest a wanted person, while an expat as well as honoured for his honesty.

Colonel Yusef Obaid bin Harmoul, Director of the Comprehensive Police Stations Department, on Monday honoured Abdullah Al Suwaidi for his cooperation in the arrest of a wanted person and handing him over to the police station.

Col. Bin Harmoul was also honoured Azhar Mohammad Sorour for his honesty to hand over a sum of money that was found to the police station and returned the money to its owner.

He also honoured the policeman Abdullah Jumah Al Marzouqi, for his dedication and sincerity at work, in addition to sending thanks and praise to him by one of the customers during the performance of his duties at the centre. Such behaviour represents the positive role of the society members, Col. Bin Harmoul said.

The awardees thanked the police for the gesture, adding that they hoped their action will motivate others to cooperate with the police.

Col. Bin Harmoul also praised the performance of the officer students from the Police Science Academy during the training period during the coronavirus pandemic, appreciating their efforts and their excellence at work.

Could this be your Lucky Day?

Watch: Icicles for a second day in Raknah in Al Ain, Abu Dhabi, lowest temperature recorded in UAE is at 2.3 °C