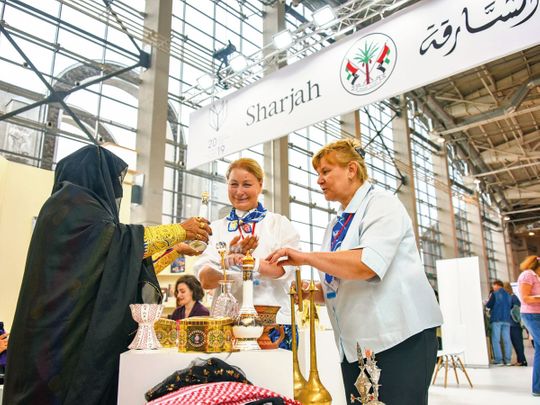 Moscow: After five days of showcasing the Emirati culture to Russians at the 32nd Moscow International Book Fair (MIBF 2019), Sharjah — the World Book Capital 2019 — has concluded its ‘Guest City’ participation at the fair, becoming the first Arab city to be offered this honour by Russia’s largest book fair.

Russian authors, publishers and intellectuals were introduced to the efforts and initiatives of the emirate focused on boosting authorship in the UAE and the local publishing landscape.

Sheikh Fahim Al Qasimi, Chairman of Sharjah’s Department of Government Relations, and head of the Sharjah delegation to MIBF 2019, said: “Sharjah set up its cultural pavilion in a country with a rich cultural history, where literature was born more than 2,000 years ago. Today, we conclude our participation in Moscow after having introduced Russians from all walks of life to the gems of Emirati and Arab cultural heritage. The success of all our cultural events and engagements in Moscow adds another feather to Sharjah’s cap and reinforces the emirate’s cultural status on the global cultural map.”

Ahmad Al Ameri, chairman of SBA, said: “After every participation in a cultural event, we recall the directive of the Sharjah Ruler to strengthen cultural and intellectual bridges with the world. For that purpose, we take our heritage, language and rich history to all its corners. Through this participation, Sharjah has widened the cultural gateway that connects Russia and the UAE.”

The highlight was the reception of the Sharjah Ruler’s theatrical work, Nimrod, which was presented to a full house at the Gorky Moscow Art Theatre.

Russian visitors were presented with 13 works by the Sharjah Ruler translated to Russian, in addition to a collection of 59 Russian language editions of Arabic literature written by Emirati and Arab authors.

SBA also signed an agreement with Moscow’s General Directorate of International Book Exhibitions and Fairs to enhance collaboration in the cultural field.