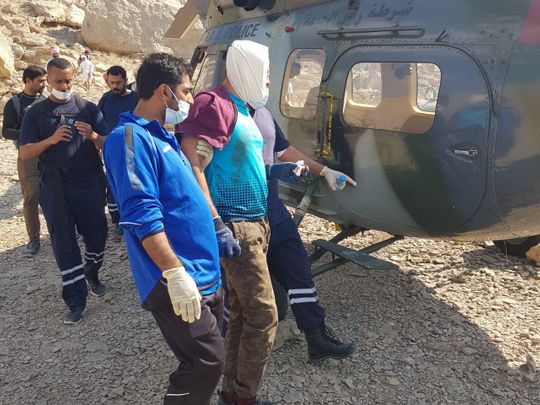 Ras Al Khaimah: A specialised team from the Air Wing Department and the Ambulance and Rescue Department of the Ras Al Khaimah Police General Command rescued an Asian, in his 30s, who was injured during a mountain trip in Wadi Dhayah in Ras Al Khaimah.

Colonel Pilot Saeed Rashid Al Yamahi, Head of the Air Wing Department of Ras Al Khaimah Police, stated that a report was received at the emirate’s Police Operations Room, stating that an Asian man had been injured during an exploratory trip in the Dhayah Valley. Immediately, a specialised team of ambulances and rescuers was formed and they left on the RAK Police helicopter, to the reported site to provide the necessary support and aid. The Wadi Dhayah area was surveyed and the location of the injured was identified. First aid was provided to him, and then he was transferred to Saqr Hospital to complete the necessary treatment.

Colonel Al Yamahi praised the cooperation of the people and citizens of Wadi Dhayah region, with the specialised Ras Al Khaimah Police team, in rescuing the injured Asian, appreciating their awareness and sense of social responsibility towards all members of the public with different ethnicities and cultures, and their eagerness and willingness to provide support and humanitarian aid to all without discrimination.

He called upon members of the public as well as visitors and tourists to the emirate to take precautions and caution when going to mountain trips and between valleys. They were urged to take security and safety precautions, take note of instructions and directives issued by the concerned authorities, and notifying the police and the competent authorities of their trips, in order to save themselves from potential dangers in rugged areas and terrain.

All permits for Ramadan tents and iftar gatherings cancelled in Ajman

UAE: Toward the next 50 years under leadership of Sheikh Mohammed bin Rashid and Sheikh Mohamed bin Zayed