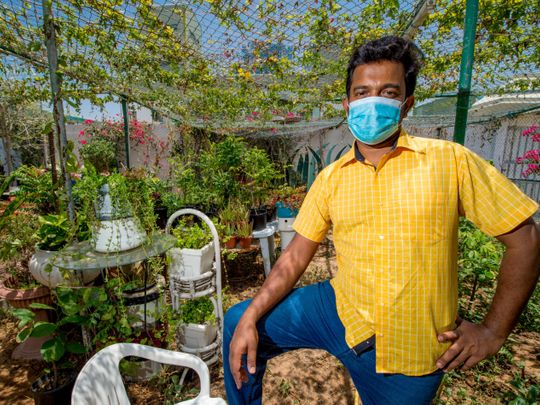 Dubai: An Indian expat living in Dubai has not shopped for vegetables, eggs and many other requirements on his menu since December.

Reason: He maintains his own kitchen garden and poultry at his villa in Al Quoz,

Praveen Kottavathil, 38, who hasn’t felt the need to go out and shop for these essentials during the national sterilisation drive, says he has created a self-sufficient ecosystem on a 3,000 sq ft plot with his sweat and toil. He has had a helping hand from his family and friends too.

“Everything is grown pesticide free, “ said Kottavathil from the Indian state of Kerala.

Kottavathil also has fish tanks and a small poultry farm where he raises chickens that are not genetically modified in any way, which means the eggs produced are organic. Four beehives in his backyard, formed through natural pollination, ensure the family gets home-produced organic honey.

“The whole idea for me has been to be sustainable and I have always desired to eat the most healthy food – one that is pesticide free,” says Kottavathil.

The Indian expat who works as an administrator said none of the produce – which runs into hundreds of kilos during the season – is given up for sale. “No way,” he says, when asked if he plans to take the kitchen garden to the next level and turn it into an enterprise.

“Whatever is produced is for the family’s local consumption. A large part of the produce is also given to friends, and those in need during in this pandemic situation,” he said.

Kottavathil says the garden previously belonged to a friend. When he and his family moved into the villa a couple of years ago, they continued to take care of it.

“We have always been self-sufficient in our food produce. But during the national sterilisation drive when we could not step out of the house, we realised the value of our garden space even more. Trust me, we never needed to buy any of these things,” he said.

Kottavathil, who is innovative in using space for his garden, grows herbs in aluminium pipes that he picked up from a construction site.

There are three fish tanks placed at the entrance of his villa. The algae water from the tank is used for irrigating the green landscape his kitchen garden offers.

“Algae water is good for plants. I have fitted pipes running from the tank to the garden area. The fish tanks are recycled with fresh water every two days.”

Kottavathil’s wife, Preeni Sivan, is an ophthalmologist by profession and she helps out quite a bit in the garden. His children, Ayanviraj, 8 and Mithuna, 4, also pitch in.

“Every morning, they are out here in the open. They play with the rabbits, explore the fish tank, dig their hands in the garden. They have so many questions about gardening and sustainability. I feel like my kitchen garden is a gift to them. When I was a child, I saw my father farming. I used to get excited seeing him till the soil. In many ways, this whole sustainable farming I am doing now has come as a full circle for me at a personal level,” he adds.