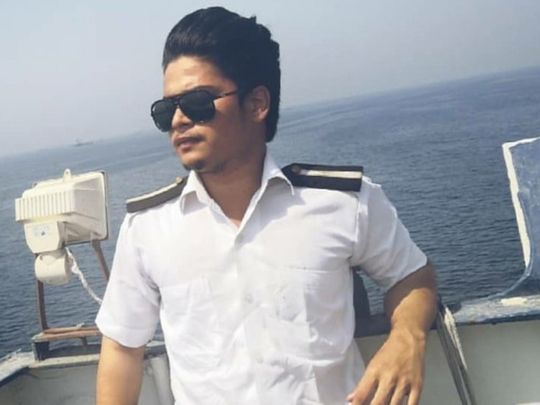 Dubai: The family of an Indian sailor is seeking help after he reportedly went missing from a Dubai ship in Iranian waters.

Priyanka Chaudhary, sister of Aayush Chaudhary, appealed to Indian authorities in India and Dubai on Twitter to help find Aayush who has been missing since July 15.

In a series of tweets, Priyanka stated Aayush, 22, is working for a Dubai-based company named Al Mutawasit Marine Services. “We have been straight away told by the company that he fell from the vessel and was lost sight of during and due to high tides. The name of the vessel is PINK ROSE. We are not satisfied whether all due procedures and attempts were made by the authorities concerned or not, since their responses to the events have been quite late and illogical.”

According to the company, she said, Aayush went missing from the ship on July 15 while the company contacted the family on July 17.

“He’s the only one who fell in the ocean even the company gave [their] final report after investigating for 48 hours.”

According to Priyanka, Aayush knows swimming.

“We have all the relevant documents along with his passport and visa. We seek your prayers, help and concern to find my brother,” Priyanka added.

Speaking to Gulf News from India, Shaili Chaudhary, a cousin of Aayush, who is helping in searching for the Noida resident, said the family has doubts over the claims made by the company.

“When he flew to Dubai early in May, he was supposed to join another ship. Instead, the company sent him on this ship which is very old. There are so many contradictions in what the company told us over phone and what they wrote in the report.”

“I have audio recordings of our brother in which he clearly mentioned that he is going through some pressure and some colleagues are jealous of him. He also told us not to give any more money to the consultant who took Rs.4,50,000 for giving this job to Aayush and never gave us a receipt for that. A friend of Aayush, who is also on board, said he is also feeling unsafe. It is very strange for a healthy person like Aayush who also knows swimming to just go missing like that. The tension in the region is adding to our concerns for him.”

In its reply to Priyanka, the Indian Consulate in Dubai said it will take up the matter with the company in Dubai and will request the Embassy/Consulate in Iran to take it up with Iranian authorities.

A spokesperson from the Consulate told Gulf News that the mission has already contacted its counterparts in Iran. “We are also in touch with the UAE FTA (Federal Transport Authority). It looks like there is some mistake in the company’s name given by the family. We are ascertaining more details,” he said.

The company told the family that Aayush fell in the water while the ship was 30 nautical miles away from Port Assaluyeh in Iran and attempts to rescue him went in vain.