Kourtney leaves the Kardashians, is she growing up? 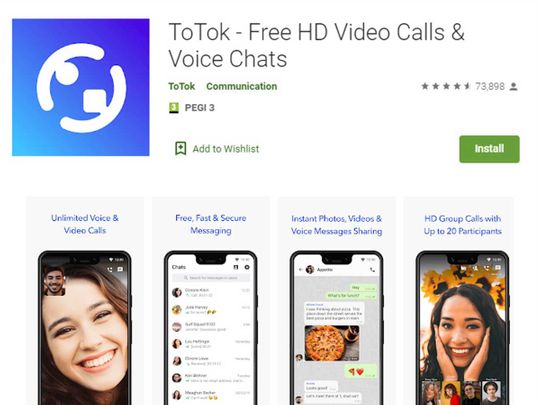 Dubai: Google store on Thursday have activated a warning message for users about ToTok app.

The warning said that "This app tries to spy on your personal data, such as SMS messages, photos, audio recordings, or call history."

ToTok is a free app for making video and voice calls that has been removed from Google Play and the Apple App Store because there were allegations that ToTok was being used as a spy tool.

The app earlier was removed from the Google Play store in December, while Google investigated, then reinstated in early January. Google now confirms the app has again been removed, but this time declined to comment as to why till this message was published.

UAE government is looking into allegations that ToTok, the communication app, may have been involved in the mishandling of user data, the app’s co-founder released a statement via Twitter, slamming the charges.

In December the co-founder of ToTok, Giac, posted a video message addressed to Apple and Google. In the 1-minute-36-second clip, he asks the two tech giants for support “to reinstate ToTok in app stores”. He goes on to say that he is part of a group of international entrepreneurs and denies affiliations to any governments including that of the UAE, US or China.

The issue was first reported on December 21, after a Dubai-based tweep said he was unable to locate the app on the Apple App store. Soon after, global reports began to emerge pointing to the mishandling of data by the firm.

Since 2017, voice and video calls using apps such as WhatsApp, Skype, Facebook, Google Duo and Messenger have been banned in the UAE. According to regulations issued by the Telecommunications and Regulatory Authority (TRA), residents were advised to subscribe to BOTIM and C’ME apps provided by Etisalat and du, and to sign up for the monthly payment plan if they intended to use VoIP apps on their UAE number.

Coronavirus UAE: Can an external laundry be a source of Covid 19 transmission?

Coronavirus: Want to leave Dubai home during Disinfection Programme? Use this website