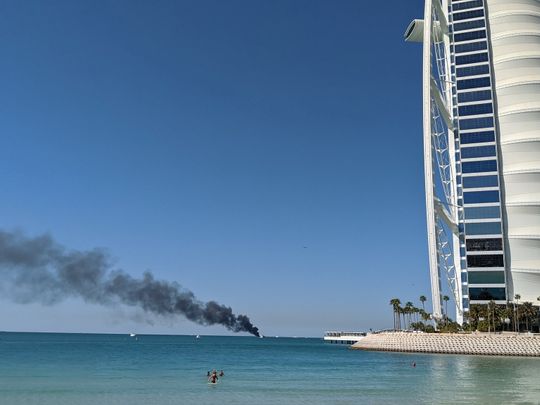 Dubai: A fire broke out on a yacht near the Burj Al Arab shortly before 2pm on Friday.

"Three people were safely evacuated and no one was injured in the blaze that appears to have been caused by engine failure and fuel leakage," Dubai Media Office tweeted.

Pictures of the incident, with black smoke billowing across the horizon, were posted on social media by beach-goers and passers-by.

One such onlooker, Keira Doherty tweeted, “Huge fire on a ship near Burj Al Arab, Dubai. Hope everyone on board is OK. Looks pretty serious,” she added.

Several people were pictured on the beach overlooking the incident.

Dubai Police told Gulf News that the fire was quickly brought under control and no-one was injured.

An investigation will be carried out to determine the cause.