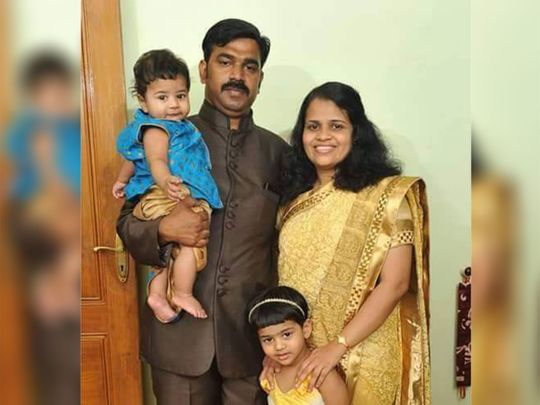 Sharjah: Justice has been served to an Indian expatriate in a legal battle against those responsible for the death of his wife.

The Sharjah Civil Court has ordered Dr. Sunny Medical Centre in Sharjah and its doctor Dr. Darshan Prabhat Rajaram P. Narayanara, who treated the patient, to pay Dh200,000 in compensation and Dh200,000 in legal costs to the husband Joseph Abraham, and the children of the deceased.

Abraham’s wife Blessy Tom, 32, a staff nurse of Sharjah University Hospital - and resident of Pathanapuram, Kollam District - was treated for a breast infection at the private clinic in Sharjah in November 2015.

The doctor had given an antibiotic injection to the patient without a mandatory test dose. Due to this gross medical negligence, the patient fell unconscious due to a reaction to the drug. She was rushed to Al Qassimi Hospital in Sharjah for emergency treatment, but died within a few hours, an official investigation discovered.

The death certificate issued by the hospital stated that Blessy died of cardiac arrest due to an anaphylactic shock. The tragic incident occurred while the patient was living in Sharjah with her husband and two children.

On June 17, the Sharjah Court of First Instance found the doctor guilty in a criminal case registered by the police and directed him to pay an amount of Dh200,000 in blood money to the victim’s family. On the basis of this judgment and the findings of the court, the victim’s husband Joseph Abraham, a Lab Analyst in Dubai Municipality, approached Ali Ibrahimm Advocates and Legal Consultants, a legal firm in Sharjah through legal consultants Salam Pappinissery, U.C Abdulla, and Easa Anees, to file a civil case to sue the hospital and the doctor for compensation. The family had sought compensatuion of Dh1 million.

Immediately after the patient’s death, the doctor left the UAE to evade prosecution. The Ministry of Health investigated the matter and submitted its report to the court with a finding that her death was caused by an anaphylactic shock due to a gross negligence by the doctor and the clinic. The clinic denied the ministry’s finding and claimed they weren’t negligent. However, the court rejected the clinc’s claims and issued a verdict in the case.

As per the judgment, the court ordered to share the amount of compensation between the husband and his two children.

“Since this doctor has left the UAE and stays in India, further action is being taken through the Indian Medical Council and Interpol,” the family’s lawyer said this week.

Dubai-based family of five among eight Keralites dead in Nepal

Who was the UAE-based Kerala expat found dead in Nepal along with seven others?

Loan defaulters, others who fled UAE: UAE civil court verdicts can be executed in India

Get up early for sale of the century only with Mastercard