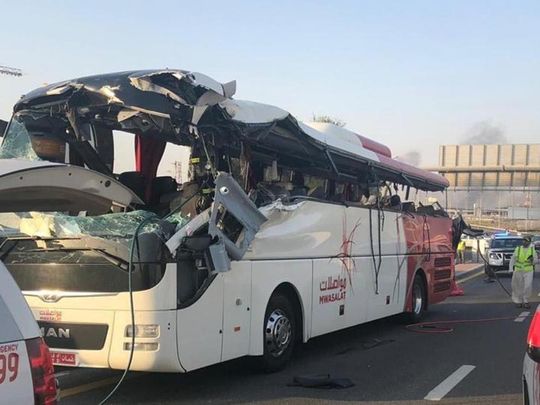 Dubai: The driver of a bus that crashed in Dubai last month killing 17 passengers admitted he couldn’t see the entire road because he had lowered his sun shade to stop the sun shining in his eyes, an official told Gulf News.

The 53-year-old Omani driver pleaded guilty at Dubai Traffic Court on Tuesday over charges of causing the wrongful death of 17 passengers and injuring 13 others.

Despite a speed limit of 40km/h, the Muscat-to-Dubai Mwasalat bus service struck an overhead height barrier at 94km/h on June 6 at the turn off from Mohammad Bin Zayed Road leading onto Rashidiya Road, where it was due to make a scheduled stop at Rashidiya Metro. The driver took a wrong turn left not designated for buses which led to the height restriction, instead of going right.

“He admitted to lowering the sun shade and didn’t notice the signboards or warning signs, despite having used the road several times before the accident,” said Al Felasi. “His reckless driving, not paying attention to the road, and his speeding, caused the disaster,” he added.

Al Felasi added that this particular stretch of road had recorded zero deaths over the past 10 years, since the height barrier had been installed.

“The signboards and warning signs were enough to warn any driver,” said Al Felasi. “The bus driver didn’t pay attention despite being responsible for the lives of passengers. Passengers usually trust the bus driver and put their lives in his hands, knowing that he should have passed hard tests to obtain such a licence,” added Al Felasi, who also noted that most passengers were sleeping when the incident occurred.

According to Dubai Prosecution, there are two lanes for buses and taxis in the four-lane road leading to the entrance of Al Rashidiya Metro station. There are also flashing light signboards about 342-metres from the location of the accident to warn drivers of the upcoming height restriction, speed bumps, and two big signboards to warn drivers to stay in lane before the barrier.

After hitting the barrier at 94km/h in an area with a 40km/h speed limit, the bus stopped 44-metres away from the point of impact.

During Tuesday’s hearing, Assistant Chief Prosecutor Rashid Al Shamsi, and Al Felasi asked Presiding Judge Ali Ghnaim, for the toughest punishment to be handed down to the driver of seven years in jail and a fine of Dh3.4 million in blood money for the families of the victims.

Twelve Indians, two Pakistanis, an Irish, Omani and Filipina, were killed in the accident.

Judge Ghnaim rejected a plea from the driver’s lawyer to release his client on bail until the next hearing on July 9.

Ghassan El Daye, head of litigation Middle East with the UK-based law firm Charles Russell Speechlys said the large number of deaths resulting from the accident stiffens the penalty as per article 342 from the UAE’s penal code. “If more than three people have died in traffic accident caused by the driver or more than three people injured, then the driver will be facing tough punishment as per traffic law, but the article also states that some circumstances help aggravate the punishment,” said El Daye. Such circumstances include if the crime happened due to the offender’s failure to observe the ethics as dictated by his employment, profession or craft, or if he was under the influence of intoxication or sedation when the accident occurred.

Ready to play for India in T20Is, says Harbhajan Singh