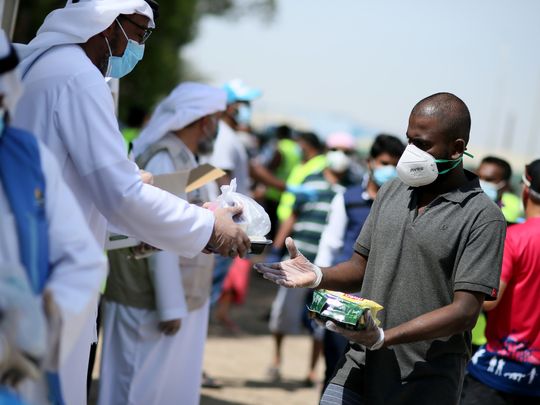 Dubai: On Thursday, the Dar Al Ber Society hosted a distribution event at DP World Jebel Ali where over 1,500 workers received meals, drinks and tea as part of the charity’s efforts to contribute towards the 10 Million Meals campaign, launched by Sheikh Mohammad Bin Rashid Al Maktoum, Vice President and Prime Minister of the UAE and Ruler of Dubai at the start of Ramadan.

Juhi Yasmeen Khan, Charity initiative expert at Dar Al Ber Society said, “Due to the pandemic all the tents and mosques where we hosted these distributions (last year) have been closed for safety. So we had to adapt by ensuring that the meals were reaching the doors of these workers and those in need.”

Dr. Hisham Al Zahrany, Deputy director of Social services in Dar Al Ber Society added, “In the whole Jebel Ali area we have 12,000 meals distributed to workers accommodations. This year the distribution is different than previous years due to the global pandemic. Therefore, the society has ensured that they are delivering the meals to the camps directly and to have a number of select distribution points that are supervised by volunteers to ensure the meals are shared safely and efficiently.

Dr. Al Zahrany praised the 10 million meals initiative and said it had sparked an incentive for many more people to donate.

“No doubt, Sheikh Mohammad’s initiative of donating 10 million meals came at a great time during Ramadan and the current situation calls for an initiative with a large number of donations. The initiative inspired many people to donate and contribute at our society,” he said.

“We had a team working at different points in these areas,” he said. “Eighteen captains were assigned to each designated spot and they supervised volunteers to deliver food to these locales. None of us feared contracting the virus we just did not want anyone to go hungry during this pandemic.

“When the first coronavirus case was reported in UAE, we began the food distribution. What started as distributing four meals, we are now at over a million. It is a massive achievement for us.

“Before the national sterilisation drive we were already distributing 300 meals a day. A special food help desk was opened to find out if people needed free meals. We have received a lot of support from the national security team, Dubai Police and Watani Al Emarat foundation team.”

Danube have donated Dh1 million worth of food kits

“We are taking a serious note of the economic fallout with the COVID-19 outbreak,” said Danube founder and chairman Rizwan Sajan. “Food kits are being prepared and the distribution is taking place from our warehouse facilities in Dubai, Abu Dhabi, Sharjah, Ajman and Ras Al Khaimah. Our staff is working round the clock to help deliver the kits to deserving individuals,” he added.

“Our target is to reach families suffering in the pandemic. That is why we are putting together this kit.”

“We have set up a team collecting details of such families in need. The demand for the food kit has been overwhelming and we have received several requests. We don’t want to turn anyone away and so we have launched this massive programme,” said Sajan.

“Every Ramadan, Danube Group has had a tradition of distributing Iftar meals among workers in workers accommodations across Abu Dhabi, Dubai, Sharjah, Ras Al-Khaimah and Ajman. We had distributed over 160,000 meals among blue-collared workforce last year. Since, we can’t hold such gatherings now, we had to think about a different way of serving iftar to people”, he added.

Roop Sidhu, general secretary of Indian Association Ajman, said, “The association distributed foodstuff items to over 5,000 people in Ajman and another 5,000 cooked meals were given away in Sharjah and Ajman at workers accommodations. We have been working close with the Consul General of India (CGI) for this.”

It is not just businessmen and community groups involved in feeding the needy. Individuals like Dubai-based restaurant owner Sergio Lopez has provided help 250 families since the pandemic broke out in the UAE. The Spanish expat living in Dubai has joined hands with friends to help needy families with essentials like sugar, tea, flour rice etc. “It is a time to make a positive difference to the world,” he said.

The Khalsa Motorcycle Team Dubai, a registered community organisation has been donating to 150 people every day on average since the COVID-19 outbreak began. The group comprising of a bikers from Punjab, India have been reaching out to various communities and helping individuals and families with grocery and cooked meals.

“Everyday we have a request from deserving families and the numbers are growing,” said a spokesperson for the group.

Which hospital in Abu Dhabi Emirate should I visit in an emergency?

Some UAE companies are returning staff salaries cut during COVID-19

Don't try to mimic your way into ecommerce

Oil on the rise after eight-month high on demand optimism