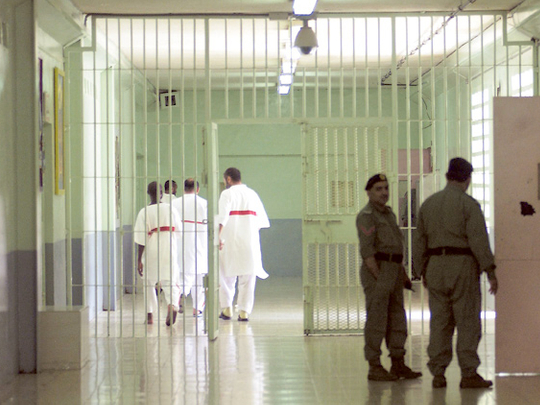 In the wake of the coronavirus pandemic, many prisons around the world are struggling to implement precautionary measures for inmates to prevent the spread of COVID-19, but Dubai has set a rare example by testing all inmates and implementing strict measures successfully.

“Dubai Central jail is the only correctional institute that conducted PCR tests to all inmates to make sure they don’t have the virus. Strict precautionary measures since the outbreak, helped to prevent spread of COVID-19 inside the prion’s wards and facilities,” Brigadier Ali Al Shammali, Director of the General Department of Punitive and Correctional Institutions at Dubai Police, told Gulf News during an exclusive visit to Al Awir central jail on Thursday.

“A long list of measures were taken by Dubai Police to ensure the safeguarding of human rights and health of inmates during COVID-19.”

Beside the inmates, all of the prison’s cleaners, employees of catering companies that provide meals to the prisoners and policemen, have also had regular tests, according to Brig Al Shammali.

The measures including thermal screening, disinfecting the wards and prison facilities and providing new masks and gloves to the inmates on daily basis helped keep the virus at bay, he added.

“We use a disinfection tunnel inside Dubai Central jail and disinfect all vehicles inside the facility. Social distancing floor stickers, hand sanitisers as well as easy access on hygiene products were part of the measures. The four gyms and praying rooms inside the jail have also been temporarily closed as per health directives,” said Brig Al Shammali.

Despite the strict measures, inmates can still visit the crafts workshops to learn new skills. The prison’s craft centre, however, has reduced its capacity to 30 per cent as precautionary measure.

Inmates can also still study through e-learning by dividing them to groups and keeping a safe distance.

Brig Al Shammali, said the prison’s population witnessed between 30 to 35 per cent decrease after orders issued by Dubai Police and Dubai Prosecution to release some prisoners.

Earlier, Sheikh Mohammed bin Rashid Al Maktoum, Vice President and Prime Minister of the UAE and Ruler of Dubai, ordered the release of 874 prisoners of different nationalities ahead of Ramadan.

“The pardon as well as deporting inmates who finished their sentences and prosecution order to bail people with minor cases like financial and minor assault cases, helped to reduce the number of inmates inside the jail by 35 per cent,” he said.

“The first test held at the police station, before transfering the inmate to the temporary jail where he is tested again. The third test is conducted when the inmate enters the central jail and we keep him in quarantine until we get the results. Each new inmate needs to pass three tests,” Brig Al Shammali said.

He added that the prison has a quarantine building equipped and ready to welcome any suspected cases.

Behind a glass, sound-proofed door, inmates can communicate with their families inside and outside the country, thanks to a remote visual communication service.

“The service was launched as per the directives of Lieutenant General Abdullah Khalifa Al Merri the Commander-in-Chief of Dubai Police, as part of a humanitarian initiative that enables Dubai inmates to communicate with their families in a way that achieves the principle of physical distancing with a full commitment to the precautionary and preventive measures,” Brig Al Shammali said.

Each inmate can make a request to the prison to speak with his family and after approval, a link will be sent to the family to have a meeting through Skype business.

Each prisoner can enjoy 20 minutes via video call with his family.

“We are planning to extend this service even after the crisis ends," he added. "In the past only families of inmates inside the country can visit them but now, inmates whose families live outside the UAE can also enjoy the virtual visits.”

The use of video conferencing systems is another way authorities are trying to prevent the spread of the disease in the prison.

In another step to prevent close contact, inmates consult with doctors through a virtual conferences, eliminating the need for a physical visit.

“We have specialised doctors in the prison’s clinic that communicate with inmates while the latter sit in their prison wards. The doctors can give full medical advice to the inmate and we provide the prescribed medicine,” Brig Al Shammali added.

He said that during COVID-19, inmates can be prosecuted and stand trial until getting verdicts via remote court hearings through video conference.

Meanwhile, the prison’s reception welcomes only a small number of visitors every day as most of Dubai Police services are available online,

“Usually we welcome customers to apply or receive certificates or airline tickets and other services, but now most our services can be done online,” Brig Al Shammali said.

However, a few customers are allowed to enter the reception if they have other requirements after passing through thermal cameras, provided with gloves and masks and adhere social distancing.