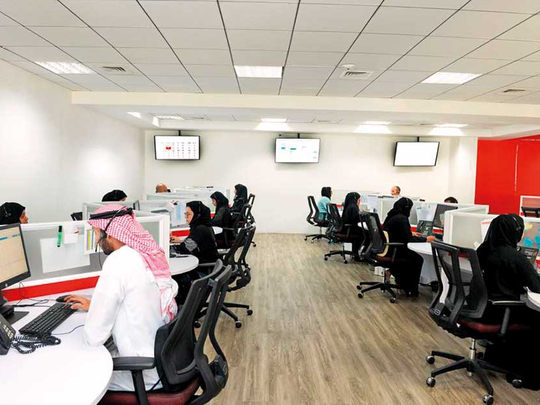 Dubai: The Amer call centre at the General Directorate of Residency and Foreigners Affairs in Dubai received more than 211,000 calls from the middle of March until end of the month, it was announced on Sunday.

On March 26, GDRFA-Dubai announced the activation of the remote work system for Amer call centres starting from Thursday March 26 for two weeks subject to renewal and evaluation.

Amer call centre will be operating 24 hours according to the working mechanism applied remotely to achieve the highest levels of productivity in work in accordance with the decision of the Dubai Executive Council to implement 100 per cent remote working in all departments, institutions and governmental entities in Dubai.

The stat results of Amer centre showed the readiness and high efficiency of its national cadres.

GDRFA Dubai, said the Amer call centre responds to comments and inquiries of customers inside and outside the UAE in various languages, as it includes a specialised well-trained human cadre to respond efficiently and effectively about GDRFA Dubai transactions or direct the customer to the competent authority in case the inquiry relates to another authority.

As part of the 100 per cent remote-work for employees, GDRFA-Dubai stated that they provided laptops and closed headphones for their employees to respond to customers questions.

What the employees said

Alia Jaafar Al Estad, executive employee at Amer-Call-centre said that she received a thanks letter from Major General Mohammad Al Marri, director general of GDRFA-Dubai, that encouraged her to work harder to serve the customers.

“Remote working taught me how to continue working despite the challenges,” she said.

Anood Ahmad Al Jasmi from Amer-call center said that it helped her to look after her family too as working from home make her feel safe in these critical times.

GDRFA-Dubai calls public to use www.gdrfad.gov.ae or GDRFA Dubai smart app to finish their transactions.

UAE weather: Warm day with partly cloudy skies and an increase in humidity at night

20 people rescued from bus swept away by flooding in Hatta, Dubai