'Be prepared': With water scarcer, Egypt pushes farmers to use much less

Harley-Davidson ends its ride in India

BAPS Hindu Mandir in Abu Dhabi: Hindu temple not to use steel, iron 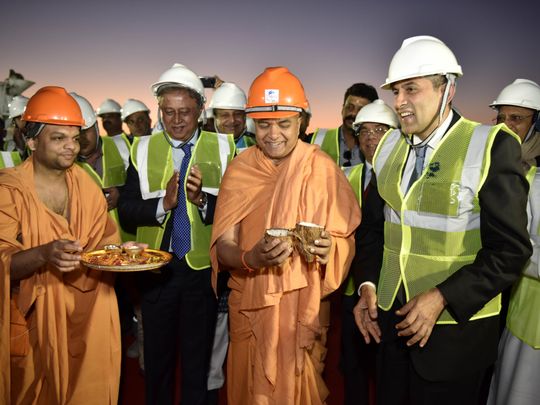 Abu Dhabi: The first Hindu temple coming up in Abu Dhabi will not use steel or ferrous materials, it was revealed during the first fly ash concrete pouring for its raft foundation on Thursday.

A large contingent of expatriates from the Indian diaspora gathered at the site of the BAPS Hindu Mandir to witness the major construction milestone.

Describing the ceremony as UAE’s largest single pouring of fly ash concrete in 3000 cubic meters, Ashok Kotecha, spokesperson of the temple committee, told Gulf News: “Usually, [building] foundations have a mix of concrete and steel. However, as per traditional temple architecture in India, no steel or iron reinforcements will be used. Fly ash will be used to reinforce the concrete in the foundation. Throughout the [whole structure of the] temple, the architecture is like several pieces of jigsaw put together without any steel or ferrous materials.”

Fly ash is used as a reinforcement in concrete. In some cases, fly ash can add to the concrete’s final strength and increase its chemical resistance and durability. Fly ash can significantly improve the workability of concrete.

Over 3,000 craftsmen are working tirelessly in India, carving icons and statues with 5000 tons of Italian Carrara Marble and the exteriors will be made of 12,250 tons of pink sandstone.

Addressing the audience, Kapoor thanked the UAE government and said: “it was a great privilege and honour to visit the temple site for the first time.”

Dr. Omar Al Muthanna, chief executive officer, CDA, Dubai, the religious observer from the government, said: “Religion is a key factor to feel at home. The UAE is not a passing home. We want you to feel completely at home and this is our commitment to you.”

The ceremony was conducted by Brahmavihari Das, the senior most saint of the BAPS Swaminarayan Temple group.

Special prayers for the project and the UAE were said.

Addressing the gathering, the priest said: “This temple transcends the borders that divide us. It’s destined to be a place beyond the limits that split us. [It’s] something we have experienced within the depth of our souls in the UAE.”

Presenting the timeline of the temple from the time permission was granted, the priest thanked the benevolent rulers of the UAE for gifting 27 acres of land for the temple and its parking facilities and several officials and members of the society for their tireless efforts.

He hailed the entire project that would be created with a multi-cultural, multi-religious team.

The expatriates, who were present, shared their happiness and excitement to be part of the historic ceremony.

Dhru Bhat, a businessman in Dubai, said: “It’s an amazing and proud day for the Indian community in the UAE. I feel very emotional to witness something we have been talking about coming to fruition.”Vishal Patel, an investment banker, felt amazing to be part of history being created in the UAE . “There is so much unity among different cultural and religious people of UAE,” he said.

Rajni Krishnakumar, entrepreneur and former corporate person, said she was emotional to see the first fly ash pouring into the temple foundation. “The UAE has been my home for more than 30 years and my heart is full of gratitude for the Rulers’ epic gesture to provide us with such a spectacular land to construct this place of worship,” she said.

Watch: How a 3-year-old Indian boy trapped in a swimming pool in Dubai was rescued

IPL 2020 in UAE: Fans soak up the excitement as action goes live