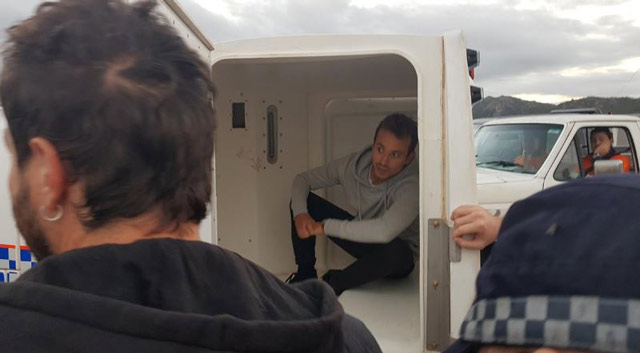 A well-known French television reporter and his crew were arrested on Monday while filming protesters blockading a coal port in Australia's northeastern state of Queensland, media said.

State police confirmed people had been arrested and charged with trespassing at the Abbot Point coal terminal, but were unable to give immediate details.

Reporter Hugo Clément and his television crew were filming an environmental documentary for France 2, said Frontline Action on Coal, the group leading the protest at the port against India's Adani Enterprises, which is digging a controversial coal mine in Queensland.

Pictures from the protest group showed Clement crouched in a police van and two others, one with a video camera and the other with a camera, being guided by police towards the van.

Australian Broadcasting Corp said Clement and his crew were been released on bail and are due to appear at the state's Bowen magistrates' court in early September.

Adani's Carmichael mine and rail project has been the target of protests for nearly a decade, but opponents lost their battle in June when the company finally received approval to begin construction.

The French team were filming two protesters blocking access to Adani's Abbot Point terminal, from which it plans to export coal from the mine, said Amy, a representative of Frontline Action on Coal, who only gave her first name.

Police told the journalists they were blocking the railway corridor and then arrested them, rather than merely telling them to move out of the way, she said.

The French embassy in Canberra had no immediate comment on the incident.

Adani, owner of the coal port, said it was aware of the protest but had no comment on any arrests.

"We encourage people to base their opinion on the facts, and to conduct any protest activity legally and safely, without putting themselves or our employees, contractors or other community members at risk," it said in an emailed statement