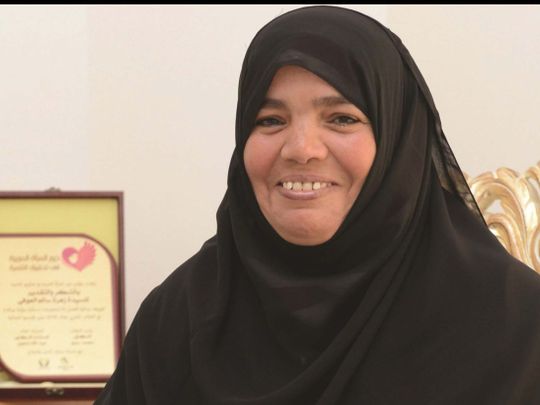 Dubai: Knowing the value of education, an Omani mother has endured travelling 25km daily through rocky roads and mountainous valleys to reach distant villages and teach women and children the basics of reading and writing.

Hailing from a village in Oman’s Al Hamra, Zahra Salem Al Aufi, 51, also took the dual role as a mother and teacher to her seven children and other villagers who moved out to the city to continue their education.

Illiteracy and limited access to quality education was prevalent in the village and this prompted Zahra to do her part and become a volunteer educator.

“I didn’t have the privilege to continue my education as I got married right after finishing fifth grade. But it didn’t stop me from educating myself and I continued reading books and science-based novels,” said Zahra, who is one of the nominees in the third edition of Arab Hope Makers, an annual award launched in 2017 by His Highness Shaikh Mohammad Bin Rashid Al Maktoum, Vice-President and Prime Minister of the UAE and Ruler of Dubai, honouring people for their humanitarian projects.

Back in 2007, while raising and educating her own kids, Zahra started hosting 20 children between five to ten years at her home to help them memorise the Holy Quran and study social sciences.

Realising, however, that their parents also could not read, she launched an initiative called “Fighting my village’s illiteracy is my responsibility,” through which she aimed to educate more families across other villages.

For two years, she travelled 25km daily through rocky roads and mountainous valleys to reach distant villages to teach women the basics of reading and writing and promote self-study. Eventually, the number of her students climbed to 100.

To fund her initiative, Zahra cooked and sold meals to schools and shops in Al Hamra. She spent the profits she made to buy books, educational tools and also gave rewards to encourage her students.

“I woke up at dawn to prepare meals and distribute them to schools before heading to teach the women and children,” she shared.

Because of her hard work, her educational initiative attracted other volunteers who contributed small amounts of money to expand the programme.

She now supervises the centres across villages, while over 35 volunteer teachers have taken the role to teach.

To date, Zahra has opened 22 centres in 22 villages that benefit more than 500 individuals a year. Seven of the centres are dedicated to teaching kindergarten students the basics of reading and writing before they start their formal education, while 15 schools teach women the Holy Quran.

Recalling the early years of her mission, Zahra said: “We used to teach in places across villages where we spread a mat under a tree; in various Majlis or abandoned homes that we spruced up and converted into make-shift classrooms.

Zahra’s friends, neighbours and families describe her as a “long-time dedicated supporter” of the local community.

For her efforts and devotion, she received the prestigious Sultan Qaboos Award for Voluntary Work in 2017 and she was named among the leading 10 influential female figures in the Arab world by Arab Teachers’ Union the following year.

A doting mother, Zahra has also passed on her passion for knowledge to her children who all graduated from medicine, law and engineering schools.

Zahra’s initiative has come a long way but she said her journey of educating villagers will never end. She said voluntary work has given her life a sense of fulfilment, happiness and satisfaction.

Watch: Why you should renew your expired UAE residency visa before October 10

Ask the law: Insurance company in UAE refuses to pay damages in factory fire. What now?

'Are you sure you work for Gulf News?'