NMC stock should gain in the long-term 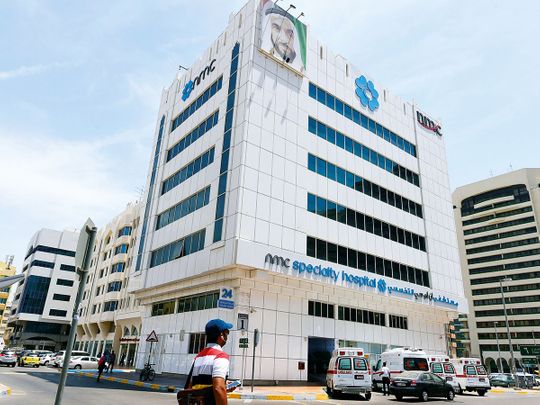 Dubai: Retail and institutional investors in NMC Health were caught off-guard on Wednesday when two key shareholders sold a chunk of their holdings. But analysts view the move as a net positive for the healthcare company and one that could even help the stock price.

The well-known Abu Dhabi investors - officially known as Saeed Mohamed Al Qebaisi and his relative Khalifa Butti Al Muhairi - sold a combined 15 per cent stake in the UAE’s largest private healthcare provider at 12 pounds a share, a discount of a fifth to where the shares were trading on Tuesday. (On Wednesday, the share closed at 12.6 pounds, down 15.8 per cent.)

Although such a move would be largely perceived as a negative given that it may indicate that the shareholders have lost confidence in the stock, historically, a discounted stake sale has often led to a rise in stock prices in the long-term.

Analysts said the move has got rid of a significant chunk of the uncertainty that had bogged down the stock.

“The announcement by two major NMC shareholders removes a major bearish overhang,” said Vijay Valecha, Chief Investment Officer at Century Financial. “The move will reduce selling pressure on the counter and should trigger a re-rating of the shares to the upside.”

Khaleefa Bin Butti had pledged NMC shares as collateral against loans and the sale may therefore remove a potential overhang on the stock, said Saul A Rans, an analyst with Morgan Stanley.

Following the deals, Saeed Bin Butti will remain a main shareholder in NMC Health with a 12.5 per cent stake and commit to a year-long lockup for his shares in the company. Khalifa Bin Butti will retain a 4.7 per cent shareholding in NMC Health and commit to a six-month lockup. Prior to the sale, Al Qebaisi held 17.4 per cent of NMC shares while al-Muhairi held 14.7 per cent. (Al Qebaisi and Al Muhairi also cashed their stakes in Finablr, also listed on FTSE, sending its stock tumbling 17 per cent, on their plans to sell a 6 per cent stake worth around $75 million.)

But the decision to sell off the shares could yet plunge the company into some short-term turmoil, given that it has been embroiled in a bitter battle with Muddy Waters, the US hedge fund that produced a report last month questioning NMC’s accounting practices and highlighted “red flags” in the reported cash balances. It suggested the margins were “too good to be true”.

NMC, which has been has been undergoing a review of its accounts since then, saw its London-listed shares more than halve in mid-December after the hedge fund announced that it had a bet against the stock.

The shares gained some reprieve after the company announced an independent review of its books, but still ended 2019 down by around 34 per cent. On Wednesday, the shares plunged further after the news of the stake sale, closing 15.8 per cent lower.

Though NMC did confirm some aspects of Muddy Waters’ characterization of its debt - notably that it uses reverse factoring which is reported in trade payables and uses extensive overdrafts - the firm dismissed the report as a whole as “false and misleading.”

Trouble on many fronts
NMC was founded by Abu Dhabi billionaire Dr. B.R. Shetty, who also owns a majority stake in London-listed Finablr, the majority owner of foreign exchange Travelex. The latter is currently confronting a cyberattack.

Azizi Developments to invest over Dh3.5b in new projects

First of its kind in the Arab World: UAE launches Young Economist Program

Campervan near miss on the M6 near Preston