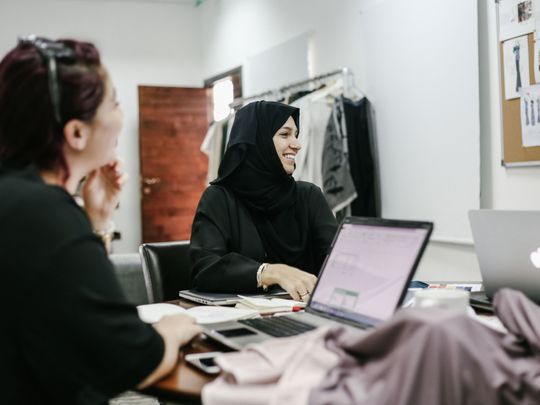 Hidden somewhere in the lanes and bylanes of Al Quoz, in a rather modest warehouse, Emirati designer Latifa Al Gurg sits busy at work. She remains slightly unfazed at all the attention she has recently grabbed after winning the competition to design the Expo2020 Dubai workforce uniforms that will be worn by more than 30,000 Expo staff and volunteers. “It’s just a very busy time for me,” she says, and then adds softly, “I am so overwhelmed and honored to have received this opportunity.”

Al Gurg is the founder of fashion label Twisted Roots, and is currently working with the Expo2020 team to develop her sustainable creations for the Expo workforce that will welcome the welcome the world to Dubai a year from now.

From construction to fashion

Born in Dubai, Al Gurg is an electrical engineer by profession. “I think I came into fashion quite by accident,” she says. Working initially in the family construction business, Al Gurg took a sabbatical after her third child. “I was also traveling quite a bit around this time, so I left my job and decided to focus on my growing family. But it was during my travels that I increasingly realized that the travel clothes available didn’t appeal to me in any way. They were mostly modest fashion wear, which loosely translated meant ethnic wear. Something as simple as finding the right scarf to pair with a dress was a tough job. Also, having a Danish mother, I was familiar with the concept of layering in fashion, a common style in Denmark where it is very windy. I was looking at the same style of layering in the clothes here. The more I thought about it, the more it led me to think about fashion in general.”

Latifa took a few short courses at the London College of Fashion to understand the industry, particularly manufacturing, design and textile development. “I also studied in London and travelled to Paris to the fabric exhibitions. At that point I was ready to source and import the fabric from the international market, and needed to find few manufacturers who would give me the clothes as per my designs. But I struggled to do that. In Dubai, most manufacturers did large scale and fast fashion, but I wanted to create a brand for affordable luxury, offering good quality clothes with fine detailing. In Paris, I looked for manufacturers as well, but no one would take my quantities and I was not ready to pay for 1000 pieces of garments in one style,” explains Al Gurg.

Then one day, while coming back from Paris to London, I met my teacher who taught me manufacturing on board the same train. “She asked me where I was in my business, and told her I was nowhere. When I told her I was still looking around for manufacturers, she turned around and said I could well do it on my own. She took out her notebook, and wrote down how I could go about it. I came back and spoke to my husband about it and we did a proper market research to find out what people needed. When we realized there was a need in the market for such a brand, the next step was finding the place and recruiting the right people.”

Twisted Roots started its operation in 2014 with only five people. “I had a master cutter, a couple of tailors and a consultant who would guide me in a few technical parts,” says Al Gurg. Being inspired by the spirit of travel, she chose the name Twisted Roots for her brand. “It also reflected my mixed heritage. I believe that when you travel, your roots get twisted because you learn from different cultures and you grow with that knowledge. In a global society everyone’s roots are twisted as we belong to a global culture and grow together.”

Today Twisted Roots manufactures the designs of Al Gurg, and has slowly grown to also take in third party orders. “We have people now coming in and telling us that they love our finishing, our fabrics or there may be aspiring designers who come to us for consultation… the business has grown over the years and our biggest moment was entering the competition to design the uniforms for the Expo workforce,” she says.

From local to global with Expo 2020 Dubai

It was a special moment when Al Gurg’s designs were shortlisted. “On October 5 we were chosen as one of the top three participants. We were then expected to take our designs and make samples of them and present that in a runaway show. There were just three weeks to get that done and I’m afraid it was quite a rushed job. The designs will include a national dress as well as one for expats who will be part of the workforce and include clean lines and simple silhouettes. My designs were inspired from the UAE’s heritage and the Expo 2020 Dubai logo. It was derived from my understanding of the culture of Dubai that not just accepts other cultures but also blends them together.”

Al Gurg included an element of sustainability in her designs by using recycled polyester in the clothing that she showcased as part of the competition. “While the shirts were chemically recycled polyster, the hats and pants were mechanically recycled. The bags were made of Jute. I also designed an identifier for the workforce inspired by the Expo Logo. It was in the form of a lanyard with a Sadu print to reflect the traditional weaving process,” she explains.

Al Gurg is currently working with the Expo 2020 Dubai team to fine tune the designs of the uniforms according to their needs. She says, “It is such an honor to be on a platform like this and to be able to see my vision on a world stage. It’s been a very rewarding journey so far.”