Japan's Nissan casts around for a new CEO 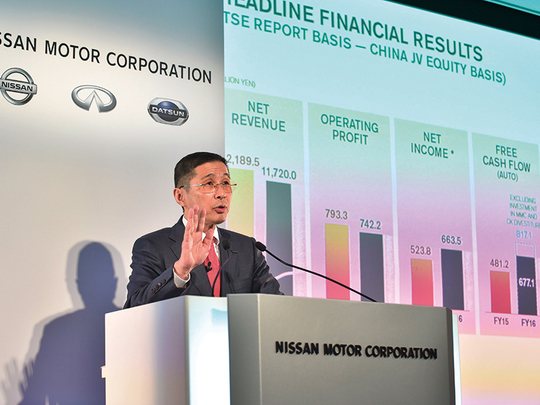 Tokyo: Nissan Motor Co. is looking for its third CEO in as many years.

Following the resignation of Hiroto Saikawa after a scandal over pay, the Japanese automaker’s board needs to find a leader who can guide the company through decade-low profits and job cuts as car sales slow globally. In addition to restoring confidence among the ranks, the new CEO will have to manage a complicated relationship with top shareholder Renault SA, its partner in a global carmaking alliance with Mitsubishi Motors Corp.

The board set itself a deadline of end-October to find a replacement. The pool of about 10 candidates includes people from Nissan and Renault, as well as non-Japanese and women, according to Nissan. The right candidate must have a deep understanding of the alliance with Renault and Mitsubishi, said Masakazu Toyoda, head of the nomination committee alliance.

Saikawa took over as CEO in April 2017 from Carlos Ghosn, who was arrested in November for alleged financial crimes including understating his compensation — allegations Ghosn has denied. In June, Saikawa said that he should be held responsible for the instability unleashed by Ghosn’s downfall and that he wanted the company to accelerate the search for his replacement.

Here are some of the potential candidates:

* Chief Operating Officer Yasuhiro Yamauchi, who will become acting CEO on September 16. Yamauchi, 63, is a Nissan lifer who also sits on the board of Renault. He was promoted to COO earlier this year, partly to preserve management ties between the automakers.

* Makoto Uchida, president of Nissan’s China joint venture. Like many other automakers, Nissan counts the country as its single biggest market, contributing almost a third of its operating income in recent years.

* Hideyuki Sakamoto, in charge of manufacturing and supply-chain management, joined Nissan in 1980 as an engineer and has worked around the world, including the Nissan Technical Centre in North America, Nissan’s largest affiliate supplier in Japan and Renault in Brazil.

Daniele Schillaci, the CEO of disc-brake manufacturer Brembo SpA who left Nissan earlier this year. As executive vice-president at Nissan, he led sales and marketing. Before that Schillaci was at Toyota Motor Corp. from 2002 to 2015 at various positions in Europe. Close to Renault, he has confronted Saikawa in the past at meetings, and may make a strong external candidate.

Too hard to move a couch? Rental startups see a market

Big Data can't tell you everything

GCC to play a key role in sukuk issuance in 2020

10 things to watch out for in Dubai property in 2020: Rents to go down, tenant's market