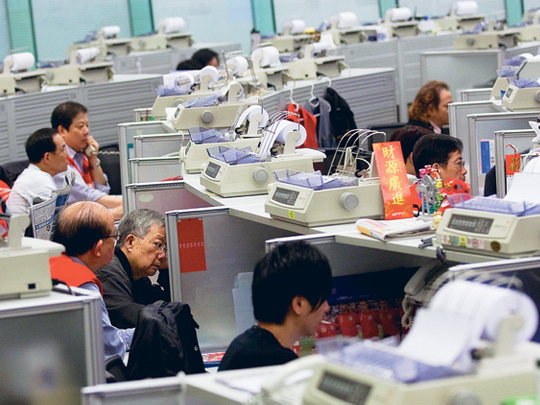 At close of trade, the Hang Seng index climbed 0.2% to 26,954. The Hang Seng China Enterprises index was pretty much flat.

The sub-index of the Hang Seng tracking energy shares rose 0.1%, the IT sector gained 0.5% and the financial sector ended 0.2% higher.

The top gainer on the Hang Seng was MTR Corp Ltd, which gained 3.8%, while the biggest loser was Sino Biopharmaceutical Ltd, which fell 4.6%.

Industrial profits fell 9.9% in October year-on-year to 427.56 billion yuan ($60.74 billion), marking the biggest drop since the January-February period and compared with a 5.3% decline in September.

Trump said Washington was in the “final throes” of work on a deal that would defuse a 16-month trade war with Beijing, but also underscored Washington’s support for protesters in Hong Kong, a potential huge sore point with China.

China said on Tuesday it had summoned the U.S. ambassador to protest the passage in the U.S. Congress of the Hong Kong Human Rights and Democracy Act.

Authorities in the city hope that a lull in clashes over the weekend during local elections, where pro-democracy candidates scored a landslide victory, can translate into more calm after nearly six months of turmoil.

Around the region, MSCI’s Asia ex-Japan stock index was firmer by 0.4%, while Japan’s Nikkei index closed up 0.3%.

About 1.13 billion Hang Seng index shares were traded. The volume traded in the previous trading session was 2.42 billion.

At close, China’s A-shares were trading at a premium of 27.43% over Hong Kong-listed H-shares.