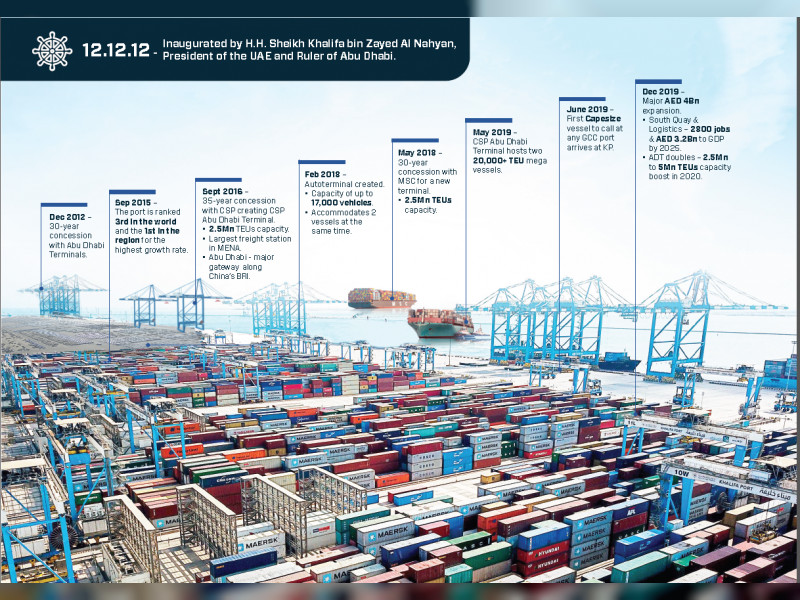 Of particular note is the investment of AED2.2 billion in the development of South Quay and Khalifa Port Logistics, as well as the AED1.6 billion expansion at Abu Dhabi Terminals, ADT.

The South Quay development, which will be completed by Q1 of 2021 comprises a 3km quay-wall with 18.5 metres along-side draft for general cargo, ro-ro and bulk usage. It will also include eight berths and 1.3 million square metres of the terminal yard.

The Khalifa Logistics expansion, for multi-purpose usage, will encompass a 3.1km quay wall with an 8-metre draft, 15 berths and land plots, which can be tailored to individual customers.

The expansion at ADT will include an extension of the quay from 1,400 to 2,265 metres and an addition of 10 new ship-to-shore quay cranes effectively doubling ADT’s handling capacity from 2.5 million to 5 million TEUs.

With this capacity expansion project in place, Khalifa Port will see its container handling capacity jump from the current 5 million to 7.5 million TEUs, which sets it firmly on the path towards its 9 million TEU milestone over the next five years.

Capt. Mohamed Juma Al Shamisi, Group CEO of Abu Dhabi Ports, said, "As global trade volumes increase over time, the world’s leading port operators must think decades ahead in their planning and execution. Through strategic collaboration with partners and top industry players, such as ADT, MSC, China’s CSP, and Autoterminal Barcelona, Khalifa Port is developing sustainably and has become one of the fastest-growing ports in the world.

Ahmed Al Mutawa, CEO, ADT, said, "The latest investment of AED1.6 billion, which doubles our handling capacity to 5 million TEUs by 2020, will see ADT take its place among the top 40 largest container terminals in the world, and positions us well for future growth."

Featuring state-of-the-art maritime infrastructure, including 23 (current) of the world’s largest ship-to-shore quay cranes, Khalifa Port will be the first in the UAE to be linked to the new Etihad Rail network, which is currently under construction.